DETROIT- A coalition of marijuana law reform advocates have announced the cities they have targeted for petition drives to put pro-marijuana initiatives on the ballot for 2014. Included: 11 cities and one county. 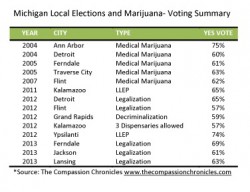 “The State of Michigan is ripe for change,” said Tim Beck, co founder of the “Safer Michigan Coalition” which provided legal, consulting and funding services for seven of the last eight local ballot initiatives wins since 2011. “It is highly likely every one of these efforts will be successful. One of our goals is to get the Legislature to support HB 4263, which has bi partisan sponsorship. The bill makes small time marijuana use the equivalent of a traffic. This is nothing radical. 17 states including New York, Ohio, Kentucky, California and Mississippi have such laws.”

Michigan citizens have adopted pro-marijuana ordinances and state laws every time the opportunity has been afforded to them over the last ten years. The Coalition issuing the press release is responsible for 13 local victories; Grand Rapids passed a ballot proposal decriminalizing marijuana in 2012, but that was not orchestrated by the Coalition’s machine. Also approved by an overwhelming margin: the 2008 Medical Marijuana Act, a statewide ballot proposal that garnered 63% of the vote.