Why Are We the “Safer Michigan Coalition”?

This post was originally published October 3, 2014 10:00 pm by Chuck Ream. It has been recreated in a rebuild of the site.

HOW CAN WE PROVE THAT ENDING CANNABIS PROHIBITION WILL MAKE YOUR MICHIGAN CITY SAFER?

The end of cannabis prohibition would make Michigan communities safer, without new funds, in part because police would have more time to solve or prevent real crimes that have victims. This is a scientific fact, not an opinion, and is supported by data cited here.

Fewer officers are available in this time of diminishing budgets. Police need to be intensely focused on the safety of the community, not wasting time on something that the average voter doesn’t see as a significant problem.

Most Americans agree that cannabis should be taxed and regulated like alcohol, which would generate a new revenue stream for governments, and reduce its availability to minors.

To vote yes for a cannabis law reform initiative, a voter doesn’t have to like cannabis – or know or care anything about Marijuana. They only have to know that local law enforcement dollars would be better spent on protecting their safety or finding criminals than on persecuting cannabis consumers.

It is relatively unknown that law enforcement in the USA has been continually less effective at finding real criminals since it began to focus on Drug War. Murderers, rapists and robbers are apprehended far less often today than they were when Drug War began in earnest in 1971.

Data by Riedel, (2008) (1) “describes the decline in the percent of homicides

Police in other industrial countries are far more successful at solving homicides (Japan 95%, Australia 86%, England and Wales 81%, Canada 73%). Arrest “clearances” are the most basic performance measures of law enforcement, raising questions about the downward trajectory of law enforcement success in the USA. During the Drug War, success at solving crime has dropped quickly as arrests, incarceration, and spending shoot skyward. 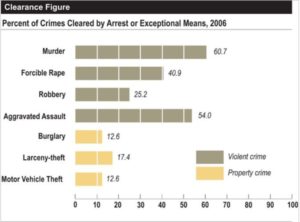 Criminal justice author Scott Christianson points out that while crime in the USA has dropped the number of arrests went from 3.3 million in 1960 to 14 million in 2004. He asks:

“…if reported crime has been going down and arrests have gone up, what
accounts for the plummeting arrest clearance rates for murder, robbery, rape, burglary, larceny, and motor vehicle theft?

Part of the answer must involve drug law enforcement…. Instead of arresting suspects for burglaries and other serious reported crimes, cops today spend much of their energy going after illegal drugs. Their arrest rate for drug possession (especially marijuana) has shot up more than 500 times from what it was in 1965.” (3)

Data from Ousey and Lee (2010) was released “against the backdrop of the precipitous decline in urban homicide clearance over the past several decades”. The authors make it clear that “there are several good reasons why this trend in clearance rates is disconcerting…. First, it raises questions about the effectiveness of recent law enforcement policies and practices…it seems curious that homicide clearance rates have been declining during a period in which incarceration rates have been sharply rising…. Second, it signals a decline in punishment certainty and threatens to undermine deterrence principles, a key foundation of our criminal justice system. Finally, lower clearance rates indicate that the state is ineffective at insulating citizens from violent offenders, which may contribute to negative social reactions such as loss of faith in public officials, an increased sense of fear and insecurity, and a general proliferation of firearms….” (4)

It is sometimes argued that small scale cannabis arrests serve to reduce the amount of serious or violent crime.

The “broken windows” theory of public safety asserts that a police emphasis on prosecuting small crimes will lead to the prevention of larger crimes. The “broken windows” strategy has been pursued with vigor in New York City under Mayor’s Giuliani and Bloomberg.

Data from Harcourt and Ludwig at the University of Chicago prove that, if they have any effect, small scale pot arrests increase the frequency of other crimes. The authors concluded that pot arrests took officers off the street for long periods of time and distracted them from being able to focus on fighting other crime. They found that “New York City’s marijuana policing strategy is having exactly the wrong effect on serious crime – increasing it, rather than decreasing it”. Veteran cops call pot busts “a waste of time”. These arrests drain time and resources not only from police, but also from courts, jails, prosecutors, and public defenders. (5)

Criminologist Harry Levine (2010) asks, “Is this what Americans want their police to be doing – arresting enormous numbers of young people, disproportionately Black and Latino, and destroying their futures, for…pot possession?” (6)

Derek Copp, a young student recently living near Grand Rapids, almost had no future. Officers looking for pot shot him in the chest with a .40 caliber Glock, in his bedroom, in March of 2009. The officer who shot him is still on the job! Derek’s attorney, Fred Dilley, told the press (John Tunison, The Grand Rapids Press, 3/9/2011) “This lawsuit questions the actions of West Michigan Law Enforcement Agencies carrying out SWAT team assaults with automatic weapons and full battle gear against college honor students and others with no prior criminal records who are believed to be in the possession of small amounts of marijuana”.

President Jimmy Carter said long ago, “Penalties against possession of a drug should not be more damaging to the individual than the use of the drug itself.”

Americans are usually surprised to learn that the effectiveness of law enforcement at solving crime has taken a dive since police turned their effort to Drug War. What about the expensive SWAT and CSI teams, new federal funds, and forensics labs with DNA testing…don’t they work? A top police scholar, Professor David Bailey of the State University of New York said, “I’ve been involved in the field for 40 years and best as I can tell, nobody has even raised this stuff. Hearing it now is like being hit by a bus”. (7)

If cannabis is damaging to our society we should not make it a low priority. However, data from Thomas and Davis (2009) shows that about 94% of the “social costs” of cannabis have to do with the costs of enforcement, not the cost of health problems. The author’s state: “variations in risk, harms and cost need to be taken into account as we think about further efforts to deal with the use of these three substances… (Cannabis, alcohol, and tobacco). Efforts to reduce social costs related to cannabis, for example, will likely involve shifting its legal status by decriminalizing casual use, to reduce the high enforcement costs. Such a shift may be warranted given the apparent lower health risk associated with most cannabis use” (8)

We should also consider the crime that Drug War directly causes, from turf battles between dealers, to organized crime and gruesome Mexican cartels. This chaotic brutality is unnecessary. There is no situation where a problem with dangerous drugs is improved by turning their manufacture and distribution over to criminal gangs.

When police try to catch a real criminal they may run into trouble, even gunfire, and they aren’t allowed to plunder the automobiles, houses, bank accounts, and other property owned by that criminal. If they ferret out a cannabis cultivator with a few plants they know that the person will usually be peaceful and they can pillage at will. Police prefer to chase around after pot, but wouldn’t your family be better protected if officers were preventing crime or finding real criminals?